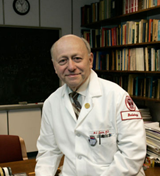 Marvin Carl Ziskin, M.D., Co-Chairman of IEEE ICES TC95 SC4, passed away on October 22, 2022, at the age of 86. Dr. Ziskin was born and raised in Philadelphia. He graduated from Temple University Medical School in 1962. While at Temple, he met Leah Zoole, and they had a long, happy marriage. Anticipating his own mortality, he wrote this note on his computer: “I have had a wonderful life. I have been so very lucky in so many ways. I had wonderful parents and children, but most of all, the ideal wife for me. I loved Leah very very much.”
Soon after becoming a physician, Marvin obtained an M.S.Bm.E. degree in Bioengineering at Drexel University, then spent two years serving our country as a captain in the USAF at Wright-Patterson Air Force Base in Dayton, OH. After his discharge in 1968, he joined the faculty of Temple University Medical School. He was an active faculty member and served 23 years as the Director of its Center for Biomedical Physics until his retirement in 2012 as Professor Emeritus of Radiology and Medical Physics.
Dr. Ziskin was active in a number of professional societies. From 1982-1984, he was the President of the American Institute of Ultrasound in Medicine (AIUM); from 2003-2006, he was the President of the World Federation of Ultrasound in Medicine and Biology (WFUMB). Marv was a life fellow of IEEE. He was the Chairman of the IEEE Committee on Man and Radiation (COMAR). He also served as Co-chair of the IEEE International Committee for Electromagnetic Safety (ICES) TC95 Subcommittee SC4 for 17 years, establishing safety standards for electromagnetic radiation. Dr. Ziskin was on the Board of Directors of the Bioelectromagnetics Society and the National Council for Radiation Protection and Measurements (NCRP). In 2011, Dr. Ziskin received the highest honor of the Bioelectromagnetics Society, the d’Arsonval Medal. His interest in ultrasound, image processing, and non-ionizing electromagnetic radiation resulted in 7 books and over 275 scientific publications. He served on the editorial boards of the Journal of Clinical Ultrasound, Clinical Diagnostic Ultrasound, Ultrasound in Medicine and Biology, Journal of Ultrasound in Medicine, and Bioelectromagnetics.
In addition to Leah, Dr. Ziskin is survived by his brother Larry, sisters Shirley and Linda, and his children Daniel, Alan, and Jennie. A memorial service will be arranged later. In lieu of flowers, donations are welcome at AIUM Future fund (https://aium.org/grants/eer.aspx), which furthers ultrasound through understanding, research, and education.